america's summer of discontent:
some fear a looming class war, others cite racism

pentagon wants to post almost 400k military personnel in US

from matthew rothschild: The Pentagon has approached Congress to grant the Secretary of Defense the authority to post almost 400,000 military personnel throughout the United States in times of emergency or a major disaster. This request has already occasioned a dispute with the nation’s governors. And it raises the prospect of U.S. military personnel patrolling the streets of the United States, in conflict with the Posse Comitatus Act of 1878. In June, the U.S. Northern Command distributed a “Congressional Fact Sheet” entitled “Legislative Proposal for Activation of Federal Reserve Forces for Disasters.” That proposal would amend current law, thereby “authorizing the Secretary of Defense to order any unit or member of the Army Reserve, Air Force Reserve, Navy Reserve, and the Marine Corps Reserve, to active duty for a major disaster or emergency.”

US to resume training georgian troops 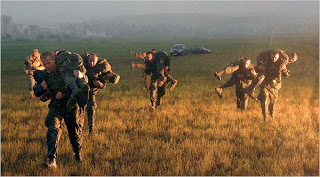 from nytimes: The United States is resuming a combat training mission in the former Soviet republic of Georgia to prepare its army for counterinsurgency operations in Afghanistan, despite the risks of angering Russia, senior Defense Department officials said Thursday. The training effort is intended to prepare Georgian troops to fight at NATO standards alongside American and allied forces in Afghanistan, the Pentagon officials said. Russian officials have been informed, American officials said. The training should not worry the Kremlin, they said, because it would not involve skills that would be useful against a large conventional force like Russia’s. “This training mission is not about internal defenses or any capabilities that the Georgians would use at home,” said Geoff Morrell, the Pentagon press secretary. “This is about the United States supporting Georgia’s contribution to the war in Afghanistan, which everybody can recognize is needed and valued and appreciated.” At the same time, officials in Washington said, the Georgians should not see the new training mission as a military counterweight to Russian influence along Georgia’s borders and within the separatist regions they fought over. A year ago, the republic’s brief, disastrous war with Russia froze a similar American training operation that prepared Georgian troops for deployments to Iraq.

gates: it's a 'mystery' how long US forces will be in afghanistan 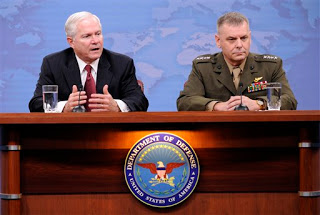 from ap: The Pentagon presented a grim portrait of the Afghanistan war Thursday, offering no assurances about how long Americans will be fighting there or how many U.S. combat troops it will take to win. Defeating the Taliban and al-Qaida will take "a few years," Defense Secretary Robert Gates said, with success on a larger scale in the desperately poor country a much longer proposition. He acknowledged that the Taliban has a firm hold on parts of the country President Barack Obama has called vital to U.S. security. Congress wants answers to what lawmakers described as basic questions to soothe a war-weary American public. "In the intelligence business, we always used to categorize information in two ways, secrets and mysteries," Gates, a former CIA director, told a Pentagon news conference. He added: "Mysteries were those where there were too many variables to predict. And I think that how long U.S. forces will be in Afghanistan is in that area."

who is funding the afghan taliban? you don’t want to know

video: 'incestuous' relationships between blackwater & US govt
from russia today: Obama did extend the contract for Blackwater in Iraq because the infamous contractor and the government are closely tied, believes investigative journalist Wayne Madsen. “So we have a lot of very “incestuous” relationships here between the government and Blackwater and key individuals who were responsible for contracts, and some still are,” he told RT.

from ap: A lecture by the woman who became the public face of the Abu Ghraib scandal was canceled Friday at the Library of Congress after threats caused concerns about staff safety. Former Army reservist Lynndie England had been scheduled to discuss her biography as part of a veterans forum on Capitol Hill. The book by author Gary S. Winkler is called "Tortured: Lynndie England, Abu Ghraib and the Photographs That Shocked the World." Members of the Library of Congress Professional Association, the employee group holding the talk, received an e-mail from president Angela Kinney saying the event was canceled due to staff safety concerns. A spokeswoman for the library said Kinney would not comment further. The group had received "numerous expressions of protest" about the lecture from its members, the e-mail said.

uk anti-terror technology: 007 or 1984?
from danger room: The British government is launching a new initiative for technology to fight terrorism. As the BBC report it this will involve “real life versions of the scientist Q in the 007 films” getting funding for gadgets to defeat groups like al-Qaeda. The BBC even uses a picture of the fictional Q. But a closer look at the initiative suggests that much of the technology being sought is closer to George Orwell than James Bond... Darpa have previously investigated brain-screening technology which might be able to detect intent, which led to some concern about prosecutions for “thoughtcrime.” And Darpa’s Rapid Checkpoint Screening Program looked at a range of physiological indicators to see whether it would be possible to spot whether someone was lying at a checkpoint interview (the answer appears to be “yes”, with some provisos), and whether the technology could be extended to read the body language, pulse rate and so on of people just standing in line. Britain differs from America in the level of surveillance that is considered acceptable. Omnipresent CCTV cameras are a fact of life here, though their effectiveness in combatting crime and terrorism is still a matter of debate. The Evening Standard newspaper complained that in spite of over 10,000 official CCTV cameras, 80% of crimes in London remain unsolved. The existing network means that, unlike in the US, it would be relatively easy to deploy new technology to detect hostile intention alongside or within the CCTV set up. Admiral Lord West, Britain’s counter terrorism minister, also mentioned to the BBC that there were other initiatives which include countering cyber terrorism and “investigating how to intercept new methods of telecommunications.” New technology is clearly on the way. And it’s not just about providing James Bond with a boat-stopping bazooka.

report: israeli troops killed unarmed gazans carrying white flags
from antiwar: The latest in a long line of charges of war crimes by Israeli forces during January’s invasion of the Gaza Strip, a new report by Human Rights Watch cites investigations and reports of eyewitnesses who say Israeli soldiers shot 11 unarmed Palestinians, including five women and four children, who were waving white flags at them. The report urged the Israeli military to conduct a thorough investigation into the charges, but this appears unlikely as the Israeli military publicly condemned Human Rights Watch for releasing the report, saying that it was unreliable because it included eyewitness accounts and accusing the US-based rights group of unfairly criticizing Israel for an invasion that killed well over 1,000 Palestinians, the vast majority of them civilians. The Israeli military also claimed that on occasion Gazans had acted illegally in waving white flags, insisting that this had endangered the civilian population. It did not appear to provide any information to directly dispute the evidence of the particular incident, but merely appeared irked that Human Rights Watch didn’t present it to them before releasing it to the public. Israel’s own probes into the Gaza War have largely stalled without result, most notably when it abandoned an investigation stemming from the direct public testimony of several of its own soldiers who reported indiscriminate killing of civilians just days after announcing it. The military declared that all the testimony was “hearsay” and that not a single claim was true.