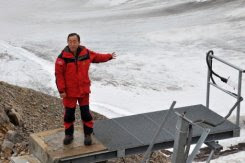 from afp: UN chief Ban Ki-moon visited Wednesday a vault carved into the Arctic permafrost, filled with samples of the world's most important seeds in case food crops are wiped out by a catastrophe.

"The world faces many daunting challenges today, one of the greatest of which is how to feed a growing population in the context of climate change," a bundled-up Ban told reporters after he toured the site in the Svalbard archipelago some 1,200 kilometres (745 miles) from the North Pole.

"The seeds stored here in Svalbard will help us do just that. Sustainable food production may not begin in this cold Arctic environment, but it does begin by conserving crop diversity," he said.

Aimed at safeguarding biodiversity in the face of climate change, wars and other natural and man-made disasters, the seed bank has the capacity to hold up to 4.5 million batches of seeds, or twice the number of crop varieties believed to exist in the world today.