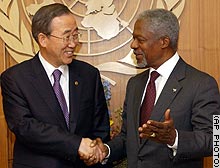 He was one of seven candidates vying to be the U.N. chief and topped all four informal polls in the U.N. Security Council…

The appointment of the South Korean official came less than a week after North Korea said it had tested a nuclear weapon, heightening tensions in the region. The claim has yet to be verified.

The security council will vote Saturday on whether to impose sanctions on North Korea, according to U.S. Ambassador to the United Nations John Bolton.

Annan hailed Ban as “a future secretary-general who is exceptionally attuned to the sensitivities of countries and constituencies in every continent,” and said he would be “a man with a truly global mind at the helm of the world’s only universal organization.”

Are the Moonies attempting to gain control of the UN? 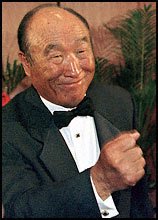 Some informed UN sources are concerned that Moon lists his religious affiliation as “non-denominational Christian,” a code word often used by the “Moonies” for the Unification Church.

In addition, Secretary of State Condoleezza Rice and UN ambassador John Bolton are attempting to have former Washington Times editor Josette Sheeran Shiner become the next Executive Director of the World Food Program. Sheeran Shiner is a member of Sun Myung Moon’s Unification Church. The term of the World Food Program Executive Director is five years. Shiner is currently the Under Secretary of State for Economic, Business and Agricultural Affairs.

Although Ban Ki-moon and Sun Myung Moon are not related, some UN members may sense that there is something amiss about the Bush administration’s strong support for the South Korean Foreign Minister, given the close links between some Bush officials and the “Moonies.” There were a few “discourage” and “no opinion” ballots cast by Security Council members on Ban Ki-moon…

Ban Ki-moon has lived in the United States for a number of years, having gone to graduate school at Harvard and serving two tours at South Korea’s Washington embassy, a diplomatic mission that maintains close contacts with the Sun Myung Moon organization in Washington, DC. The Unification Church, in addition to owning the Washington Times, also owns United Press International.

Sun Mying Moon, who was excommunicated by the Korean Presbyterian church for preaching heresy, claims he is the Messiah and intends to take control of the world.

One response to “UNification moonie nations”