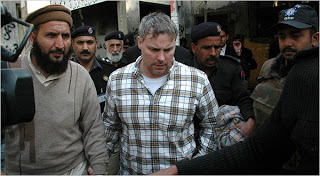 US Admits American Arrested for Murder in Pakistan Worked for CIA

from allgov: Classified a “diplomat” by the Obama administration until Monday [feb21], the man arrested in Pakistan for killing two men in Lahore has turned out to be employed by the CIA. After conducting interviews in the U.S. and Pakistan, the British newspaper The Guardian concluded that Raymond Davis was a former Army Special Forces soldier now employed by the CIA. One senior Pakistani intelligence official was quoted as saying, “It’s beyond a shadow of a doubt” that Davis was working for the spy agency at the time he gunned down two Pakistanis. Davis has been charged with murder by Pakistani police. He shot the two men allegedly for trying to rob him while he was driving through Lahore. Local authorities say the American was found to be carrying a Glock handgun, a flashlight attached to a headband, a pocket telescope, three cell phones, facial disguises and multiple ID cards. He is reported to have worked for years for as a mercenary for the CIA, including as a period with Xe, the private security contractor formerly known as Blackwater... Many Pakistanis have been enraged by the news of an armed American gunning down local citizens. If the U.S. convinces the Pakistan government to turn Davis over to American authorities, Egyptian-style anti-government protests could erupt, analysts say. The government has said it will wait until March 14 to decide what to do with Davis.