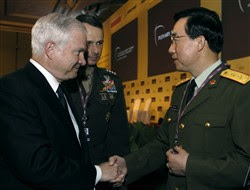 US & china to hold disaster drills

from reuters: The United States hopes to conduct its first ever humanitarian disaster relief drills with the Chinese military in late 2009 or 2010, the head of the U.S. Pacific Command said on Wednesday.

Admiral Timothy Keating said he and Lt. Gen. Zhang Qinsheng, a senior commander of the People's Liberation Army, had agreed to begin "active consideration the formulation of a plan that will lead to humanitarian assistance exercises relatively soon."

The U.S. military, which has long sought to engage China's fast-growing but secretive armed forces to avoid clashes in the Pacific, had held search and rescue and signaling drills with the Chinese, but never full disaster relief exercises, Keating told an audience at the Heritage Foundation.