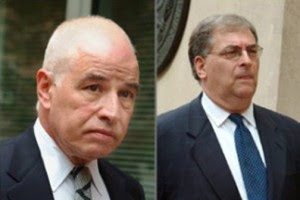 from nytimes: A case that began four years ago with the tantalizing and volatile premise that officials of a major pro-Israel lobbying organization were illegally trafficking in sensitive national security information collapsed on Friday as prosecutors asked that all charges be withdrawn.

From the beginning, the case against the lobbyists for the American Israel Public Affairs Committee was highly unusual. The two, Steven J. Rosen and Keith Weissman, were charged under the World War I-era Espionage Act, accused of improperly providing to their colleagues, journalists and Israeli diplomats sensitive information they had acquired by speaking with American policy makers...

The decision to drop the case comes just days before AIPAC is scheduled to begin its annual policy conference in Washington, which has often served as an advertisement of its influence...

The investigation of Mr. Rosen and Mr. Weissman also surfaced recently in news reports that Representative Jane Harman... was overheard agreeing with an Israeli intelligence operative to try to intercede with Bush administration officials to obtain leniency for Mr. Rosen and Mr. Weissman in exchange for help in persuading Democratic leaders to make her chairwoman of the House Intelligence Committee...

update1: lawyers credit obama team for dismissing aipac case
from jewish telegraphic agency: Lawyers for the two former AIPAC staffers charged four years ago with dealing in government secrets credited the Obama administration for dropping the case. “We are extremely grateful that this new Administration, in coordination with the U.S. Attorney’s Office in Virginia, has taken seriously their obligation to evaluate cases on the merits and not to allow an unjust prosecution to continue solely due to momentum,” said the joint statement by lawyers for Steve Rosen and Keith Weissman issued Friday, hours after the government filed for a dismissal of the charges against the two former senior staffers for the American Israel Public Affairs Committee. “This Administration truly shows that theirs is a Department of Justice, where the justice of any case can be re-evaluated and the government can admit that a case should not be pursued.”

video update: springtime for aipac: annual confab draws protest
from liamh2: Its Springtime for AIPAC! The mega-Israel Lobby convenes annually in Washington, D.C. at the convention center. AIPAC sucks out over $3 billion a year from our fast fading treasury for Israel with little or no dissent from the fakers in the U.S. Congress. If only the cities of Detroit, LA, Atlanta and Baltimore had such a puffed-up advocate in their corner. If you're lucky, you can spot some of your Congressional low lifes crawling on all fours into the convention center to pay homage to the Israel-First types. Isn't there a law against that kind of bootlicking? As always, lovers of the Republic were outside on the streets on Monday, May 4, 2009, protesting AIPAC. For some background on the all-powerful Israel Lobby, see: http://original.antiwar.com/justin/2009/04/30/the-lobby-wants-war/ and http://original.antiwar.com/justin/2009/05/03/the-spies-who-got-away/ and http://wrmea.com/ and http://www.irmep.org/ila/ and The Israel Lobby and U.S. Foreign Policy, by Mearsheimer and Walt, at:
http://us.macmillan.com/theisraellobbyandusforeignpolicy

flashback: in the thrall of aipac: why obama can't save us