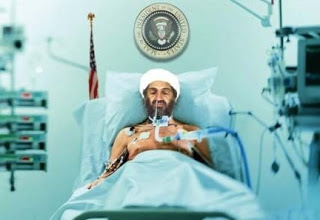 from paul joseph watson: Seemingly desperate for Emmanuel Goldstein to remind Americans that they should still fear their own shadow, the corporate media is maniacally preempting the release of a Bin Laden tape before or after the election, despite there being no actual evidence that one is forthcoming.

If the CIA really want to resurrect the ultimate boogeyman yet again as we sail past Halloween, they really ought to get a move on with the election just four days away. The lack of a video tape statement from Bin Laden has the mainstream press evidently worried, but the government assures them that one is on the horizon:

"Multiple senior government officials tell ABC News the intelligence community is anticipating a message from Osama bin Laden before or just after the presidential election... As we race toward Election Day, sources say a number of intelligence analysts have concluded it is critical for al Qaeda’s top leader to be seen or heard, if only for public relations purposes. Those analysts believe that if bin Laden is not heard from, he runs the risk of being considered irrelevant or impotent. According to sources, the full weight of the intelligence electronic eavesdropping and human sourcing is right now desperately looking for any hint of a bin Laden statement. So far there is only rumor, no hard evidence a message is coming, officials said.”

In a related development, an alleged Al Qaeda leader purportedly called for Republicans and George W. Bush to be “humiliated,” seemingly unaware of the fact that Bush was not running for re-election. Former counter-terrorism czar Richard Clarke told CNN last week that Osama Bin Laden would attempt to influence the 2008 U.S. election with a terrorist attack or the release of a video tape.