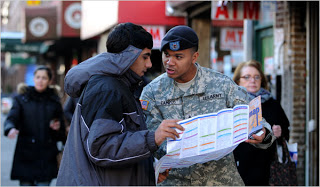 US military will offer path to citizenship for immigrants

from nytimes: Stretched thin in Afghanistan and Iraq, the American military will begin recruiting skilled immigrants who are living in this country with temporary visas, offering them the chance to become United States citizens in as little as six months. Immigrants who are permanent residents, with documents commonly known as green cards, have long been eligible to enlist. But the new effort, for the first time since the Vietnam War, will open the armed forces to temporary immigrants if they have lived in the United States for a minimum of two years, according to military officials familiar with the plan. Recruiters expect that the temporary immigrants will have more education, foreign language skills and professional expertise than many Americans who enlist, helping the military to fill shortages in medical care, language interpretation and field intelligence analysis. “The American Army finds itself in a lot of different countries where cultural awareness is critical,” said Lt. Gen. Benjamin C. Freakley, the top recruitment officer for the Army, which is leading the pilot program. “There will be some very talented folks in this group.”