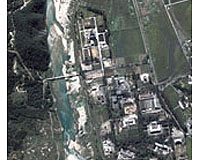 from spacewar: The United States is preparing to send experts to North Korea to launch a groundbreaking effort to disable the hardline communist state's nuclear weapons arsenal following a six-nation agreement.

The pact, unveiled by China on Wednesday, was hailed by President George W. Bush as a commitment "to realize a Korean Peninsula that is free of nuclear weapons" and "help secure the future peace and prosperity of the Northeast Asian region."

The United States, a nuclear weapons state, will lead and fund the disablement drive as Pyongyang makes a full declaration of its nuclear network by a December 31 deadline set by the agreement, officials said...

Recently leaked US intelligence had cited alleged atomic links between North Korea and Syria and said that Pyongyang may be helping the US arch rival build a nuclear weapons facility.

The reports, citing unnamed sources, were based on intelligence information apparently from an Israeli raid on targets inside Syria.

flashback: how george bush gave krazy kim the bomb
(you didn't know that? of course not, you read the new york times...)