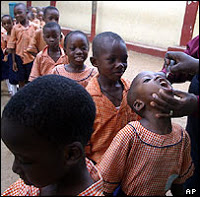 from bbc: Nigeria is fighting a rare outbreak of a vaccine-derived form of polio, says the UN's World Health Organization.

It says 69 children in the north have caught the paralyzing disease from others who had already been immunized.

The WHO says such rare outbreaks have occurred where immunization campaigns did not reach enough of the population.

In 2003 Islamic leaders brought a temporary halt to the vaccine campaign in the north saying it was a Western conspiracy to sterilize Muslim women.

The WHO says this rare outbreak of vaccine-derived polio demonstrates the need for more vaccination, not less.

But the concern is that the cause of the outbreak could be misinterpreted by people here and reinforce their skepticism of the whole vaccine campaign.

related: why you should avoid taking vaccines