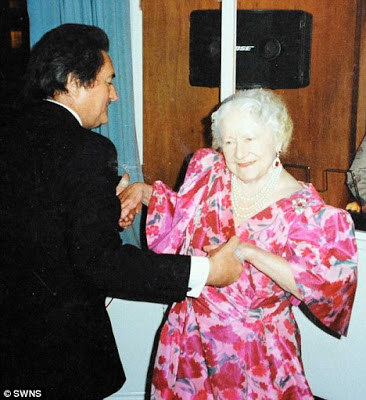 As we take a brief moment away from the chaos...

from daily mail: It is an eclectic – and sometimes eccentric – record collection, spanning Caribbean steel bands, Rodgers & Hammerstein showtunes, Canadian yodelling and Paul Simon’s pop hit You Can Call Me Al. But they were all favourites of the Queen Mother, revealed today as the contents of her private music library is made public for the first time. There are fewer than 100 albums in the collection she kept at her Highland holiday home, the Castle of Mey, but they betray broad, and sometimes surprising, tastes. Alongside the expected classical works, and timeless folk music, the collection also includes the wartime speeches of Winston Churchill, an album of lute music and comedy LPs by Tony Hancock and The Goons.

And although former aides say the Queen Mother was no particular fan of pop music, she was an avid listener of Terry Wogan’s Radio 2 breakfast show... But despite her aversion to modern music, Paul Simon’s acclaimed 1986 album Graceland, which featured a range of African musicians and contained the hit You Can Call Me Al, was apparently a particular favourite. The list of much-loved albums at Mey includes a number of performances by Noel Coward, comedy sketches by Peter Sellers, episodes of BBC radio comedy Hancock’s Half Hour and the soundtracks to both Oklahoma! and, appropriately enough for the wife of a Monarch, The King And I.