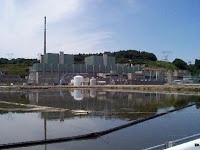 from washington post: Kerry Beal was taken aback when he discovered last March that many of his fellow security guards at the Peach Bottom nuclear power plant in Pennsylvania were taking regular naps in what they called “the ready room.”

When he spoke to supervisors at his company, Wackenhut Corp., they told Beal to be a team player. When he alerted the regional office of the Nuclear Regulatory Commission, regulators let the matter drop after the plant’s owner, Exelon, said it found no evidence of guards asleep on the job.

So Beal videotaped the sleeping guards. The tape, eventually given to WCBS, a CBS television affiliate in New York City, showed the armed workers snoozing against walls, slumped on tabletops or with eyes closed and heads bobbing.