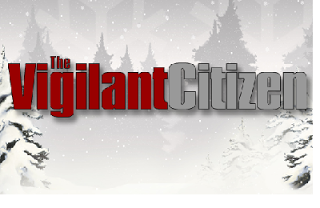 A Seasons Greetings of sorts goes up at Vigilant Citizen (VC) website. VC dismisses traditional cornball folly of gratuitous exchanges, but settles instead on earnest message to readers. The message is the revelation of "Truth".  First, VC sums up "our civilization" with little effort. Education is obedience training. Politics is little more than a puppet show and the Agenda will proceed regardless of election outcome.  People are taught to be shallow, materialistic and to immediately gratify their impulses.  There is a point - even if not looking - the lie exposes itself!  The present writer would cite 9/11 as a very good example.  It is clearly a process that takes time and effort to rise above!

VC communicates his initiation, once, the lie can no longer be bought on a personal level!  "Everything I was ever told was a lie!” I was disgusted by the world I grew up in and the people I used to look up to. That was an awful phase. But, looking back, I realized that it was just a phase – one that all seekers of truth eventually need to go through. It is shocking, disheartening, confusing and totally not cool. But necessary," says VC.  The present writer believes, VC is referring, to an initial awakening - or shock - out of a state of blissful ignorance.  A great characterization is provided by VC about the moment of "Truth"- the revelation and aftermath!  The cliche may go, "the truth will set you free," but VC adds to it, "'...first, it'll piss you off'".

The next steps are to convert initial shock into useful knowledge and differentiate fake from real.  It's becoming clear that the dream of "a house with picket fence" can become a nightmare, instead.   VC seems to be saying, you realize what means most to you, personally.  The outgrowth is to discard the rest as extra baggage. It's an excellent Seasons Greetings!