Voyager 1: Break On Through To The Other Side 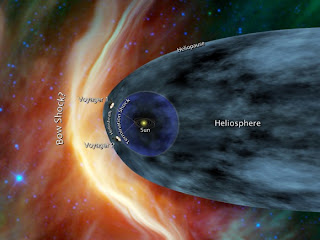 Voyager 1 is poised to break on through to the other side - into interstellar space.  An amazing achieve- ment, Voyager 1 has traveled 11 billion miles in nearly 35 years to exit solar system. Ed Stone, a Cal Tech Voyager project scientist, said, "'the latest data indicate that we are clearly in a new region where things are changing more quickly. It is very exciting. We are approaching the solar system’s frontier...From January 2009 to January 2012, there had been a gradual increase of about 25 percent in the amount of galactic cosmic rays Voyager was encountering... Beginning on May 7, the cosmic ray hits have increased five percent in a week and nine percent in a month,'" reported via Universe Today. Data transmitted by the satellite traveling at 35,000 mph, takes presently about 16.5 hours to reach Earth. "The second important measure from the spacecraft’s two telescopes is the intensity of energetic particles generated inside the heliosphere, the bubble of charged particles the sun blows around itself. While there has been a slow decline in the measurements of these energetic particles, they have not dropped off precipitously, which could be expected when Voyager breaks through the solar boundary," adds article. The present writer suspects they don't make them like Voyager, anymore--hats off!