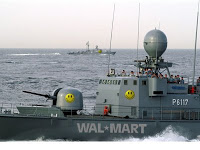 wal-mart partners with army reserve to recruit you

from ap: Wal-Mart Stores Inc. has signed on to an Army Reserve program that allows the company and the Army to work together to recruit and train people interested in serving in the military and working for the giant retailer.

An agreement signed Tuesday obligates Wal-Mart to interview and consider all qualified, participating soldiers for employment after they complete military occupational specialty training.

Lt. Gen. Jack C. Stultz, chief of the Army Reserve, was in Bentonville for the Veterans Day signing of the agreement.

When a reserve soldier who works at Wal-Mart is called to service, the company can draw on 1 million or so citizen soldiers to help identify a qualified replacement to work in the soldier's place. The arrangement is expected to lower costs of recruiting and training for Wal-Mart.

The Army Reserve launched the program in April and has already linked with numerous companies, including Lowell-based J.B. Hunt Transport Services Inc., Sears Holding Corp., Manpower Inc. and Northrop Grumman Corp., among others.