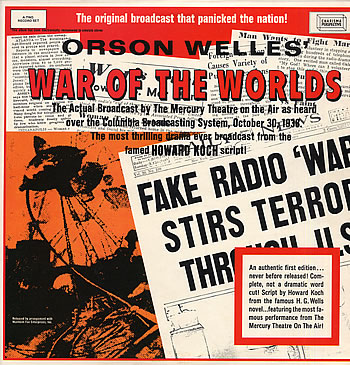 ‘war of the worlds: the remix project’ on 73rd anniversary of broadcast

thanks to markus in slc for creating this wotw remix!

from archive.org: On October 30, 1938, one of the most controversial and infamous media broadcasts occurred when Orson Welles and his Mercury Theatre on the Air performed their adaptation of H.G. Welles' classic science fiction novel "The War of the Worlds." Their radio play generated mass hysteria across America, convincing millions of people that an invasion from Mars was coming to their cities and towns, thus becoming known as "The Panic Broadcast."

Today, as a tribute to this radio broadcast, I decided to do a re-imagining of it through the use of sound effects gathered from numerous sources, along with accompanying background music to give a modern twist to this classic broadcast.
You may recognize effects from the 1950's motion picture adaptation of the novel, along with Star Wars, the CBS Special Presentation sounder, WCBS station ID, fake commercials from South Park, Ren and Stimpy, and even the famous Wilhelm yell. There are even old news clips that pertain to UFOs, including ABC's report on the Roswell UFO crash and CBS's report on the Battle of Los Angeles from 1942.

Background music was used for many of the segments. If you enjoy the music very much, I encourage you to support the artist and purchase their works from iTunes or even your local record store. The following tracks used are:

Special thanks to Clyde Lewis, James Evan Pilato, Dave Comstock and Kielen King for their wisdom and inspirations. In addition, more thanks go out to WAV Central, Sound Bible, audiomicro.com, and Tiesto.com for many of the source materials.

If you have any comments, questions or problems, please e-mail a message to warriorchief54@yahoo.com. Hope you enjoy this.

flashback: 70th anniversary of 'war of the worlds' psyop