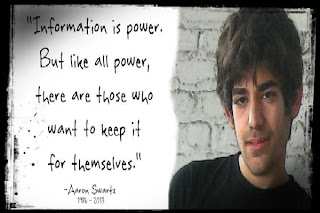 Richard Evans writes in article, "Was Aaron Swartz Murdered?," a different perspective from mainstream media that treats Swartz's suicide as a response to his 2011 indictment and legal bullying.  Swartz downloaded entire JSTOR archives,  "...because the organization pays the publishers of scholarly articles, not the authors," explains Evans, "...charged under the 1986 Computer Fraud and Abuse Act, otherwise known as 'hacking'."  Evans disagrees Swartz took his own life out of fear and points to familiar pattern of someone smart enough to challenge authority, but fails to abide by them:

"Swartz's career shows the familiar pattern of attempts to assimilate him into the system - scholarship to Stanford, lucrative job under auspices of WIRED, a fellowship from Harvard's institution on ethics. All these perks failed to control him, so they switched to Federal muscle tactics. Each attempt to control him drove him further beyond the pale. But I think his death warrant wasn't issued till last year when he became an effective leader of a million people and stopped the PIPA and SOPA bills. Effective leaders aren't allowed."

"'On those rare occasions, when a boy or girl who has passed the age at which it is usual to determine social status shows such marked ability as to seem the intellectual equal of the rulers, a difficult situation will arise, requiring serious consideration. If the youth is content to abandon his previous associates and to throw in his lot whole-heartedly with the rulers, he may, after suitable tests, be promoted, but if he shows any regrettable solidarity with his previous associates, the rulers will reluctantly conclude that there is nothing to be done with him except to send him to the lethal chamber before his ill-disciplined intelligence has had time to spread revolt. This will be a painful duty to the rulers, but I think they will not shrink from performing it.'"

"Bertrand Russell wrote frankly that geniuses would be carefully offered a place with the elite, but those that persisted in bucking the system would be exterminated," concludes Evans.

In addition to the previous argument, a second compelling point is made by Evans when he asks, "Why hanging?":

"Hanging is a horrible way to die. The sentence of hanging was intended to send a message to other offenders 'this could happen to you'. I think that's why Aaron Swartz died by hanging. It's a message to other activists -- probably those he knew who worked with him."

Today, few people realize gruesome reality of a hanging death!  "Swartz's father is an intellectual property consultant to MIT's computer lab. At Aaron's funeral, he said his son was killed by the government," writes Evans.  Gordon Duff, Senior Editor at Veteran's Today, can only conclude that rogue elements within CIA could have audacity to commit this murder.  Duff has no question Swartz's hanging was murder!

Swartz stood for something intolerable in today's upside-down world:

"At 27, he'd already reached the top of his field. He was a software genius and Internet champion. He co-authored the "RSS 1.0" a widely-used syndication format. he also co-founded Reddit which was sold to Conde Naste. He founded Open Library, an internet database dedicated to obtaining public domain documents that had been appropriated by private interests. He 'hacked' the Library of Congress database and uploaded it to Open Library making it available for free. Aaron Swartz...was an effective advocate for freedom of information.... Harvard law professor Lawrence Lessig said, 'He never did anything for the money...The government was not gonna stop until he admitted he was a felon. In a world where the architects of the financial crisis regularly dine at the White House, it's ridiculous to think Aaron Swartz was a felon.'"

Swartz stood for and paid with his life for freedom of information.  Evans agrees with Harvard Professor Lessig, when he said,  "'Aaron Swartz is now an icon, an ideal. He is what we will be fighting for, all of us, for the rest of our lives.'"  Swartz suffered a miserable death, we all should be mourning!