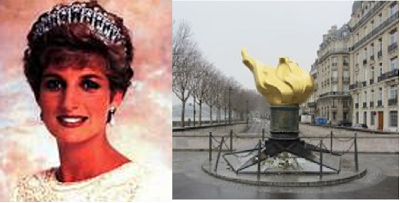 Clyde Lewis asks $64,000 question in recent Ground Zero Article, "the torch of the goddess Diana [picture, right] is now a representation of the royal sacrifice of Diana at an ancient sacrificial site. Was this truly an accident?"  Princess Diana died on the last day of August, 1997, ostensibly, due to injuries suffered from a car crash in a Paris tunnel, attributed to a reckless attempt by an inebriated driver to outrun paparazzi.  Princess Diana's death is receiving press again, because of a boast learned indirectly, coming from an operative in British SAS Special Forces Unit.   Yes, SAS may very well have been tool used to execute the Princess?  The current intent of article, will be however, to inform of occult implications of the Paris tunnel, a symbolic significance readers would be hard pressed to learn elsewhere.   Lewis reveals location's ancient occult significance:

"Princess Diana was killed (murdered) in a car crash at Pont D’ Alma tunnel in France. Point D’ Alma means 'Bridge of Souls' The area of Pont D’ Alma was an ancient Merovingian sacrificial site to the Goddess Diana. Anyone who died there while in the service of the holy blood line had their 'calling and election made sure.' This means that their souls would be taken directly into heaven. The descendants of these divine souls would also become divine on planet earth, the equivalent of a saint or messianic God. Therefore according to the ancient mythologies Prince William would considered a divine progeny, fit to be the holy heir to the secret kingdom of the earth."

A torch lies directly above the tunnel, and again, Lewis advises on its ancient occult significance:

"Near the crash site is the memorial to Princess Diana. The memorial is actually an illuminated torch that sits on a pentagram. The torch is a replica of the one held by the Statue of Liberty in the New York harbor. The Statue of Liberty is a representation of the Goddess that goes by many names. If you do the research you will find that the Lady liberty statue is the representation of the goddess Ishtar, who is also the same as Greek Athena ,Minerva, the Syrian goddess Astarte, the Roman Cybele, The Hebrew Ashtoreth, Isis (Mary) and, of course, the moon goddess Diana."

Details of Princess Diana's life and how it's been characterized to the public, an apparent attempt to mold an object of sacrifice, suspects Lewis, "...agonizing reality is that there is every circumstantial indication that by some blasphemous action Princess Diana was being molded and shaped as a modern Virgin Mary. A woman that gives birth to divine leader that is to rule over the world as a King whose divine blood line seals his lineage to great kings and as indicated through fraudulent genealogies Christ himself." A prior post on a Vigilant Citizen article, "Princess Diana’s Death and Memorial: The Occult Meaning," provides additional details how Princess Diana may have been selected to fulfill a role?