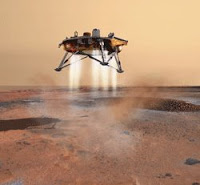 from alley insider: This could be must see TV: At 6 p.m. ET on Sunday, NASA begins live coverage of the Phoenix Mars Lander, as it attempts to make the first powered landing on the red planet since Viking 2 in 1976. Watch it online here or in Second Life. If you insist on watching on TV, Discovery Science is carrying the landing, and CNN promises to have some, but not complete, coverage at 7pm ET.

Phoenix will enter Mars' atmosphere at almost 13,000 miles per hour Sunday evening and then undergo what NASA engineers refer to as "seven minutes of hell" as it deploys a heat shield, then a parachute, and fires thrusters to touch down at just before 8 p.m. ET. At least that's when NASA first learns if the landing was a success--it takes the signal 15 minutes to reach Earth.

NASA is expecting upwards of 500,000 to tune in to its live coverage on the Web. Those tuning in will see the images at the same time as NASA, and get the analysis in real time. Phoenix's mission: Dig for ice that scientists believe exists just below the surface, and determine if it has ever, or could ever, support life.

A complete list of all attempted missions to Mars is here.