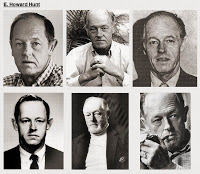 watergate plotter may have a last tale

from la times: Howard St. John Hunt remembers the night of the Watergate break-in as a bonding experience with his father.

A sweating and disheveled E. Howard Hunt roused his 19-year-old son from a dead sleep to help him wipe fingerprints from the burglars' radios and pack the surveillance equipment into a suitcase. Then, father and son raced to a remote Maryland bridge, where they heaved the evidence into the Potomac River just before dawn on June 17, 1972.

"From that point on I felt relevant in his life, that I was the one he could count on," said Howard St. John Hunt, now 52, who is called St. John.

It also was a turning point for St. John's brother and two sisters. They learned that their father wasn't just a Washington advertising executive and former diplomat. He was an ex-CIA agent and veteran of the ill-fated Cuban Bay of Pigs operation who worked for the Nixon White House as part of a secret team of "plumbers" that fixed information leaks.

The unmasking of Hunt, who was convicted in 1973, sent his family into a tailspin: His first wife, Dorothy, was killed in a plane crash in 1972 while carrying $10,000 in hush money from the White House to the burglars' families; son David was sent to live with his militant Cuban godfather in Miami; St. John later became a drug addict and daughters Kevan and Lisa became estranged from their father.

But before his death at age 88 in January, E. Howard Hunt had reconciled with his children and left the sons one last tantalizing story, they say. The story, which he planned to detail in a memoir and could be worth big money — was that rogue CIA agents plotted to kill President Kennedy in 1963, and that they approached Hunt to join the plot but he declined.

Unfortunately, when the old spy's memoir appeared this month, there was something missing...