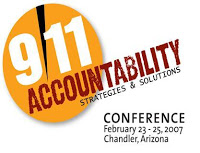 what if everything we thought we knew about 9/11 was wrong?

from arizona nbc12: Hundreds of people from across the country descend on a Chandler resort to challenge popular beliefs about 9/11.

What many people consider to be the most devastating attack ever on Americans is also the government's greatest lie, according to many attending the 9/11 Accountability Conference.

One person told us she feels like they get nothing but lies and propaganda from the government when it comes to seeking answers about the attack.

The 9/11 Truth Movement began on the internet. Followers cite alternative research that suggests the hijackers on the planes had help, and it wasn't from Osama Bin Laden. They question everything about the attacks.

Truth Movement supporters say they doubt much of what the government tells them about U.S. intelligence, the twin towers collapse and the investigations. Some people we talked to say the government has such highly sophisticated technology, that it would be impossible for the planes to go off course without anyone knowing.

Others say, the twin towers could not have collapsed the way they did without some kind of controlled demolition.

And many fear the government is using the war on terror to further an agenda to take away American's freedoms.

The 9/11 Truth followers are calling for a new independent investigation. They believe high ranking U.S. government officials are covering up the truth, and may have in some way orchestrated the attacks.

As to why so many people chose to believe the government? Some say, it’s easier to go along with the majority than follow unpopular beliefs.