where is the stone of destiny? 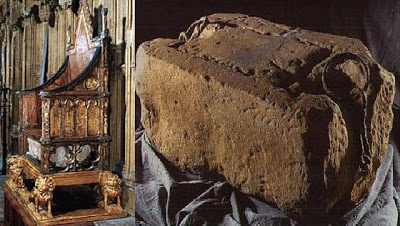 Where is the Stone of Destiny? The stone known also as the Coronation Stone, the Stone of Scone and the Lia Fail (Gaelic: Stone of Destiny), possesses heritage traceable to time of Jacob in the Holy Land. Phillip Coppens writes in article, “The Stone of Destiny: sacred kingship in the 21st century,” “…the Stone is believed to have been ‘Jacob’s Pillow’, referring to the Biblical story in which Jacob falls asleep on a stone and has a dream in which he sees angels descend and ascend to Heaven”. The stone is also called ‘Jacob’s Pillar‘. It’s long suspected the sacred stone was stolen and replaced with a poorly faked replica, but where is it?

There are several myths or legends, surrounding the stone, taking it from the Holy Land to Egypt, Spain, Ireland, Scotland, and believed, seized in 1296 by Edward I of England to be placed under throne at Westminster Abbey. In 1950, as one version goes, four Scottish nationalists took the stone, but placed a fake replica at Arbroath Abbey in Scotland. English authorities retrieved “the stone” and returned it. The stone has not been publicly seen since!

In 1996, the stone went on display in Edinburgh castle, and according to Coppens, “with the intention to shuttle the stone to Westminster Abbey for future coronations of the British monarch“.  A researcher remarks about the precious stone in movie, “The Truth about The Stone of Destiny aka The Coronation Stone,” “never thought stone would be displayed in Edinburgh,” which casts doubt on its authenticity?

Coppens informs“in mythology, the Stone, and sacred stones in general, were said to provide sacred kingship…”. Sacred stones are associated with mystical visions, as Jacob experiences after falling asleep with his head on the stone, “how terrible is this place! This is none other then the house of the Lord and this is the gate of heaven“.

Sacred kingship is considered by Debra Siddons of timely importance in her article, “Elizabeth II’s Achilles’ Heel“.  Siddons writes Elizabeth Mountbatten aka Queen Elizabeth II is critically important, ” because her power is probably the easiest to take away out of all the top Illuminati families, and taking her down would shake the NWO super-structure to its core”. Siddon believes Elizabeth a fake since the stone is fake and her coronation improper. “Elizabeth did everything she could to stop her Coronation from being televised, because she was terrified that people would see that the stone being used for her coronation was a fake,” writes Siddon.

Siddon views the Obama birth certificate a waste of time, as the US President is only a pawn! “Fortunately for us, the proof of Elizabeth’s fraud is the fake stone sitting in Edinburgh castle right now for anyone to go see,”, writes Siddon, where our efforts should be placed to rid us of our yoke!  But, where is the stone?  Is it in Dunsinnan Hill, a hill to the east of Scone, yet another legend, you’ll have to read Coppens article to get full story?