which travelers have ‘hostile intent’? 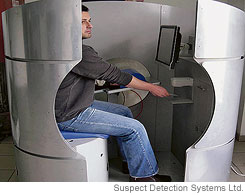 from wall street journal: At airport security checkpoints in Knoxville, Tenn. this summer, scores of departing passengers were chosen to step behind a curtain, sit in a metallic oval booth and don headphones.

With one hand inserted into a sensor that monitors physical responses, the travelers used the other hand to answer questions on a touch screen about their plans. A machine measured biometric responses — blood pressure, pulse and sweat levels — that then were analyzed by software. The idea was to ferret out U.S. officials who were carrying out carefully constructed but make-believe terrorist missions.

The trial of the Israeli-developed system represents an effort by the U.S. Transportation Security Administration to determine whether technology can spot passengers who have “hostile intent.” In effect, the screening system attempts to mechanize Israel’s vaunted airport-security process by using algorithms, artificial-intelligence software and polygraph principles.

Neither the TSA nor Suspect Detection Systems Ltd., the Israeli company, will discuss the Knoxville trial, whose primary goal was to uncover the designated bad guys, not to identify threats among real travelers.