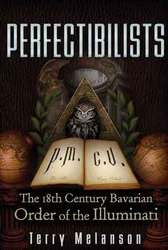 Who Are The Illuminati?

By 2005, Terry Melanson spent over a decade of study on the Illuminati.  Illuminati Conspiracy Archive website provided a platform for Melanson, who posted his progress in mid-aughts, "Illuminati Conspiracy Part One: A Precise Exegesis on the Available Evidence."  Robert Anton Wilson influenced author, who quotes from Wilson's book, "Cosmic Trigger (pdf)," as succinct description of Illuminati and their goals:

"Briefly, the background of the Bavarian Illuminati puzzle is
this. On May 1, 1776, in Bavaria, Dr. Adam Weishaupt, a professor
of Canon Law at Ingolstadt University and a former Jesuit, formed
a secret society called the Order of the Illuminati within the
existing Masonic lodges of Germany. Since Masonry is itself a
secret society, the Illuminati was a secret society within a
secret society, a mystery inside a mystery, so to say. In 1785
the Illuminati were suppressed by the Bavarian government for
allegedly plotting to overthrow all the kings in Europe and the
Pope to boot. This much is generally agreed upon by all
historians.  Everything else
is a matter of heated, and sometimes fetid, controversy."

Melanson intended to post part two in a timely manner, but instead, was invited by publisher Trineday to write a book.  The offer turned into informative, "Perfectibilists," first name chosen by group who later called themselves Illuminati.  You may be mystified by references to the occult group and wonder what the Illuminati were all about?  This is your chance to find out in a good read.  A 2009 review, "Perfectibilists -- Illuminati Demystified: The Real Story Behind the Pop Culture Phenomenon," provides more info with a title that hints at lifting veil of mystery on the path to illumination.  The above 2005 Melanson article takes reader a good distance in removing veil, but the book takes you all the way. Readers find out 18th Centuary Bavarian Illuminati, are intertwined, with "the Enligtenment" and general European revolt against aristocratic tyranny.  Secret societies and reading groups were means to spread political thought in an age before television.  Melanson shines a light on mysterious Illuminati!