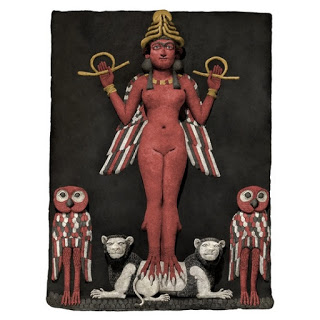 Who is Lilith? Was Lilith intended to be Adam's first wife but proved unsuitable? Does Lilith repesent a feminist figure? A Yahoo article, "Woman Before Eve: The Story Of Lilith" summarizes the figure Lilith without pedantic clutter:

"Before God created Eve, he made another woman, also for the purpose of serving as Adam's friend and companion. This woman was created out of dirt, like Adam had been. Her name was Lilith.

Lilith is not mentioned in the Bible, but is most likely a 'legend' that was passed down orally before the Bible was ever written down.

Lilith became a creature of the night. She goes around at night injuring children - she is said to harm boys on the first night of their life, and girls for the first 12 years. Some say that Lilith and her demon daughters are responsible for nocturnal emissions. To ward her off, children wore an amulet with the angels on it, to keep them safe."

Lilith balked at submitting to Adam, who she considered only her equal.  Lilith chose punishment to escape role of Adam's inferior. You can learn more of "Lilith" and her place in myth and legend. Did you know Lilith mated with Adam without his knowledge to spawn a hundred demons?