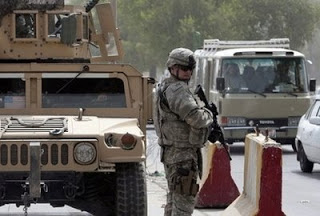 why not minot? north dakota towns unfazed by icbm rocket

from ap: There's plenty to talk about at the weekly women's coffee klatch in the small town of Parshall, and no one bothered to mention the unarmed booster rocket for an intercontinental ballistic missile lying in a ditch where an Air Force truck overturned.

"We talked about the oil boom, weddings — everything under the sun," Arlene Zacher said Saturday. "But nobody ever mentioned that missile. I guess that shows that people aren't worried about it — I'm certainly not."

The Air Force said a truck carrying the booster for a Minuteman III overturned Thursday a few miles east of Parshall in northwest North Dakota, but there was no danger to the public.

The truck and booster rocket, which is 66 feet long and weighs 75,000 pounds, were still sitting along the road Saturday, under armed guard.

"The scene is still in the assessment phase," said Maj. Laurie A. Arellano, an Air Force spokeswoman. "It's still on its side in the ditch."

Arellano said the wreck would stay there for a least a few more days.

"It has to be 100 percent stable for movement. It's not a quick process — we have to make sure everything is stable first," Arellano said.

The truck was traveling from Minot Air Force Base to a launch facility in northwestern North Dakota when it crashed on the gravel road Thursday morning between Parshall and Makoti, about 70 miles from the air base. Two airmen in the vehicle were not seriously injured, the Air Force said.

Zacher said residents of Parshall, a town of about 1,000 people, are used to missiles being transported in the area, and they trust the Air Force.

"If there is a problem, they will take care of it," she said. "They do a very good job."

In Makoti, a farming community of about 145 people, Darwin Quandt said he wasn't worried.

"They're moving them things around all the time, so we're used to it," Quandt said.