Why So Many UFO Sightings? 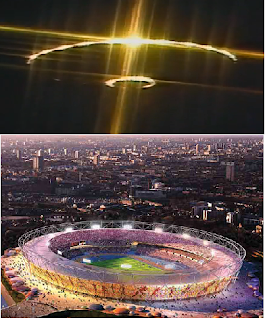 Have you noticed a rising number of UFO sightings?  You can keep up with the most current reports at www.latest-ufo-sightings.net. Is it an embargo on truth about existence of extraterrestrials or something else?  A prominent conspiracy theory centers on a faked alien invasion at the 2012 London Olympics.  In a 2010 article, “Are the 2012 Olympics part of a plot to take over the world?“, Steve Rose compiles conspiracy that’s grown into cottage industry. The writer observes a small minority believe they see something besides poor creativity in odd Olympic logo and mascots, and come up with “…a very different answer: we were being primed for the establishment of the New World Order, by means of the greatest hoax in history.” The official logo, mascots, brand consultant Wally Olin’s Khazarian ancestry or biblical-sounding street names that surround Olympic site, may not be enough to convince you?  A ten minute You Tube video submits a faked alien invasion and landing will be staged with suppressed technology at the Olympic village on 8-11.  The video also illustrates lexagrams encoded in Olympic title (6:15 mark), revealing veiled esoteric symbols and concepts.  You still may not be convinced, but you should be wondering?  The present writer can only ask much as Rose, “are the 2012 Olympics part of a plot to take over the world?”