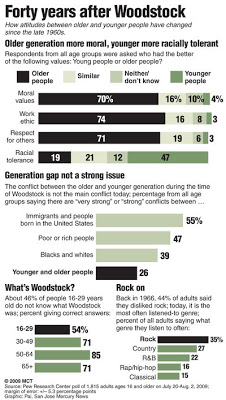 woodstock gave peace a chance (now look at the change!)

from leonard pitts jr: On Saturday, it will be 40 years since 400,000 hippies descended on Max Yasgur's dairy farm for a concert.

Jimi Hendrix performed, as did Richie Havens, the Who, Janis Joplin, Joe Cocker, Joan Baez, Santana, and Sly and the Family Stone, among others. It was billed as three days of "peace and music." It became a generational signpost: Woodstock.

Forty years later, a faint patina of absurdity attaches to those days. One watches archival footage of young people groping and grooving and getting stoned in the mud with the same faintly horrified fascination one watches young people of earlier years dancing the jitterbug or swallowing goldfish. It seems quaint — something foolish and long ago.

And it comes as no surprise that one of former Vietnam POW John McCain's most memorable applause lines during the last presidential campaign was that he missed Woodstock because "I was tied up at the time." It's a wisecrack that neatly encapsulates the culture wars — feckless hippies turning on and tuning out versus a Navy flier doing his duty under duress for flag and country.

Which is not to buy into the inferred argument that there was no meaning in those mud-splattered days. Woodstock was the distillation of an ideal which held that avarice could be stilled, hatred could be silenced, and the disparate tribes of humanity could find reconciliation, in the chords of a song.

It was a common belief back then. It's hardly coincidental that Coca-Cola came out two years later with the iconic commercial in which a multi-ethnic chorus declares, "I'd like to teach the world to sing in perfect harmony."

The idea that you could play your way to peace or harmonize your way to love did not end when the hippies left Yasgur's farm. It resurfaces every time a roster of performers gathers for some planet-wide concert to heal African famine, global warming, the American farmer.

For that matter, the idea was not born on Yasgur's farm, either. History records an episode on Christmas Eve of 1914 when German soldiers faced off against entrenched French, Belgian and English troops. The Germans set tiny Christmas trees and lighted candles upon the parapets of their trenches and began singing carols. Before long, allied troops had crawled cautiously out of their holes to watch and listen. Shortly after that, they joined in the singing. There followed an unofficial truce. Enemies sang together, played soccer, exchanged small gifts, buried their dead. For much of the week between Christmas and New Year's, music stopped the war.

But if the ideal was neither born nor died on Yasgur's farm, it nevertheless reached arguably its fullest expression there. Granted, Woodstock did not stop the war in Vietnam, even for a week. Indeed, young people left the farm, cut their hair, put on suits and ties, pantsuits and sensible shoes, and became doctors, cops, TV executives, mothers, fathers — respectable and responsible. Four decades later, they are retirees, dandling grandchildren on arthritic knees and eligible for the senior discount at Denny's. They joined the world they famously opted out of.

But before they did, they authored what amounts to a statement of faith in the power of all us we, singing harmony and getting by with a little help from our friends. Granted, it is a statement strikingly out of key in an era where music is more often associated with product placement than division healing. More to the point, it is a statement that bespeaks hapless youth and hopeless naivete. Who among us is still young enough to think you can sing peace into being?

But 40 years ago, some of us gave it a try. Absurd? Maybe. But as generational signposts go, you could do a whole lot worse.