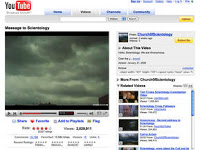 from raw replay: An internet organized group called ‘Anonymous’ has begun a worldwide campaign to protest the church of Scientology. The following video is from CBC’s The National, broadcast on February 10, 2008.

why we are at war with scientology

hackers aim wrath at scientology practises
from tech.co.uk: A group of anonymous hackers has declared war on controversial religion Scientology. The religious group, which many prefer to refer to as a cult, has previously been targeted by the group, with many scientology sites crashing in the US and UK as a result.

from tech.co.uk: A person claiming to represent the anti-Scientology group 'Anonymous' has denied to TechRadar that it will attack Church of Scientology websites on Sunday February 10th. 'brbcsis', commenting on this TechRadar story , says: "The 10th of February is to be a day of global, peaceful protests IRL (In Real Life), not further attacks on CoS websites. Anonymous opposes illegal activity; anyone claiming otherwise is either misinformed or seeking to cause trouble."