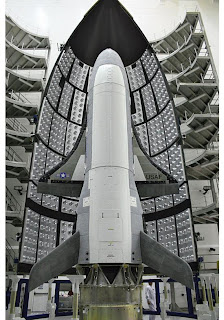 What kind of payload does the unmanned X-37B carry? There's been much controversy, including an allegation the mini-shuttle is designed to attack satellites! A Space Travel article by Morris Jones asks good questions about the mysterious craft in its run up to a second flight, "Opening Up The X37B". The payload bay is only 2.1 meters by 1.2 meters. What can it carry? The article suggests the bay probably includes a solar panel, antenna boom, cameras, but have doubts about the necessity of a telescope. Laser-based communications systems are ideas tossed out of unusual items that may be behind those payload doors? Jones concludes his suggestions could be wrong but nobody will know what is really onboard until more is revealed! The program is too mysterious! Russia and China have suspicions shared in a recent Danger Room article, "Secret US Space Plane May Be Too Mysterious". Will an unsuspecting mankind fall victim to a secretly dominated near Earth space?