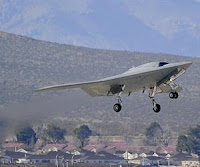 Northrup Grumman's Unmanned Combat Air System (UCAS) demonstration program took a step forward with a successful test flight on Nov. 22 of the air vehicle 2 (AV-2). The AV-2 took off from Edwards AFB, CA and landed a half hour later, concluding an entirely pre-determined flight. "The X-47B is a computer-controlled unmanned aircraft system that takes off, flies a preprogrammed mission, and then returns to base - all in response to mouse clicks from a mission operator. The operator actively monitors the X-47B air vehicle's operation using simple situational awareness displays, but does not fly it via remote control, as some unmanned systems are operated," reports Space Travel. The next steps are carrier launches and recoveries in 2013 and "autonomous aerial refueling demonstrations are planned for 2014". A previous post covered the X-47B's maiden flight with video directly available here. The Rise of the Machines is taking place right before our eyes!