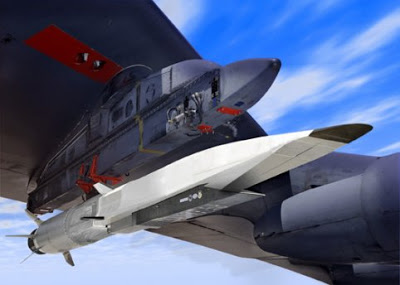 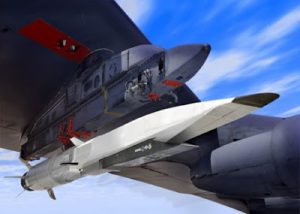 A test of X-51A set to achieve hypersonic flight today, dropped from under the wing of a B-52, reports Universe Today. You can view the previous May 26, 2010 flight on You Tube, where the X-plane performed for 200 seconds. X-planes are designed to be dropped from under a wing of a B-52. Test fights conducted over the Pacific Ocean take off primarily from Edwards AFB in California. A nice history of the X-Plane program is available on NASA website.

A description of hypersonic plane is provided by US Air Force website:

A booster allows X-51A to reach sufficient speed, where scramjet engine can fire and ride the wave. It's compared to lighting a match in a hurricane and keeping it lit!

A glimpse of intended use for X-51A is clearly stated in this space.com article, "'we could have in the future such things as hypersonic weapons that fly 600 nautical miles in 10 minutes,' said Charlie Brink, X-51A program manager with the Air Force Research Laboratory at Wright-Patterson Air Force Base in Ohio, during a June 1[2010] teleconference. [Most destructive space weapon concepts.]" I feel safer with the knowledge that military can deliver payloads anywhere on planet in just hours! I suspect former Secretary of Defense Donald Rumsfeld, who placed programs under Air Force auspices, is smiling!