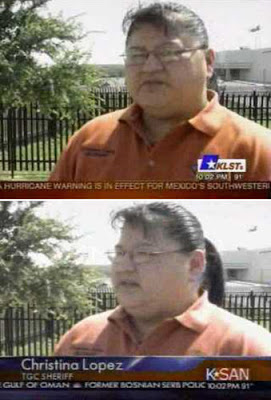 You Can Change the Channel, But Local News Is the Same

from nytimes.com: Call a reporter at the CBS television station here (in Texas), and it might be an anchor for the NBC station who calls back. Or it might be the news director who runs both stations’ news operations.

The stations here compete for viewers, but they cooperate in gathering the news — maintaining technically separate ownership, but sharing office space, news video and even the scripts written for their nightly news anchors. That is why viewers see the same segments on car accidents, the same interviews with local politicians, the same high school sports highlights.

The same kind of sharing takes place in dozens of other cities, from Burlington, Vt., where the Fox and ABC stations sometimes share anchors, to Honolulu, where the NBC and CBS stations broadcast the same morning show. The changes have drawn the ire of critics, who charge that there are fewer and fewer journalists actually covering local news. The agreements behind this sharing are also attracting the attention of another group of viewers — federal regulators.

Amid stiff competition for advertising revenue, these agreements are a “survival strategy” for weak stations, said Perry Sook, the chairman and chief executive of Nexstar, which owns the CBS station here, KLST.

The rise of the agreements resembles the retrenchment of the American newspaper industry, but it has been far less publicized.

The Federal Communications Commission does not know how many agreements exist between stations, making it impossible to judge their effects. But Julius Genachowski, the F.C.C. chairman, indicated last week that the commission was beginning to study the issue. “It’s something we’re taking a close look at the F.C.C.” he said. He sounded especially curious about what he called behind-the-scenes cooperation between stations that collaboratively sell ads and negotiate contracts with distributors.

Even as Internet use rises, local television remains the No. 1 source of news for most Americans. There’s an honored history — parodied in the film “Anchorman” — of competition between stations, just as there used to be between newspapers in some major cities.

But the owners of stations have gradually reduced costs and, arguably, competition. Building on the longtime sharing of cameras and helicopters by stations, the first “shared services agreements,” for newsrooms, and “local marketing agreements,” for ad sales, were put in place more than a decade ago.

They became more commonplace, according to local TV executives, during the recession, when stations suffered mightily and reduced their news staffs, even while adding newscasts to create more opportunities for advertisers. The agreements enabled some stations to carry out further layoffs, and they continue apace, most recently in Toledo earlier this spring.

A University of Delaware study last year found versions of the agreements in at least 83 of the nation’s 210 television markets. (“It is remarkable that neither the F.C.C., nor any commercial media data company, has an accurate picture of the phenomenon,” the study’s authors wrote.)

The agreements are more prevalent in smaller markets, although even cities as large as Denver have them. There, the study found, newscasts on the Fox station and the CW station had the same stories, scripts and graphics more than half the time.

The sharing is evident, too, in San Angelo, a low-rise city of 93,000 where the market price of West Texas intermediate crude is shown before the Dow, and where hunting and fishing times are shown after the weather report.

The anchors are different at the NBC station KSAN and the CBS station KLST, but they read similar scripts in side-by-side studios. It’s almost comical, for a viewer flipping the channel back and forth, to see identical segments about spot news and health. (The weather segments, however, have different graphics and hosts.)

The anchors and reporters at the stations declined interview requests, citing company policy. But Mr. Sook said the stations were a “perfect example of the purpose of a shared services agreement.” Without the agreement, he said, KSAN would have no local news at all, because it would not be profitable.

Together, the two stations employ about 35 people. They jointly decide what news stories to cover.

“I don’t mean for this to be a criticism, but it really cuts down on competition,” said Ty Meighan, a former reporter for The San Angelo Standard-Times who is now a spokesman for the city. “Competition makes the media better.”

KLST and KSAN have the only local television news in town. The Fox station in town, KIDY, rebroadcasts the news from San Antonio, a four-hour drive away. On the bottom of the screen, headlines from local newspapers scroll by, the product of another kind of a shared services agreement — this time with the E.W. Scripps Company, the owner of the papers.

DuJuan McCoy, the owner of KIDY, said he believed such arrangements were necessary in small markets. It can cost up to $1 million to run a TV news operation in a market the size of San Angelo’s. “It is very difficult, if not impossible, to generate enough revenue to justify the expense for a locally produced newscast,” he said.

Advertisers, he and other television executives say, have new options nowadays, including their own Web sites and pages on social media sites, which cut out the TV middlemen. KLST and KSAN are like two flavors of ice cream, chocolate and mint chocolate chip — intended to attract more people than just one flavor would.

Public interest groups have criticized the cutbacks at local newsrooms because they reduce the number of editorial voices in a given market. They assert that because TV stations hold licenses to the public airwaves, they have a responsibility to serve local communities. “The same cookie-cutter content above a different graphic doesn’t cut it,” said Craig Aaron, the head of Free Press, a nonprofit media reform group that has gathered case studies of sharing by stations.

“Worst of all, maybe, is that we’ll never know what’s missing — what dirt isn’t being dug up, what questions aren’t asked, what stories are going uncovered,” Mr. Aaron said, calling the sharing “covert consolidation.”

Some station owners say they would prefer to have more overt consolidation. They share, they say, because federal media ownership rules forbid them from outright ownership of more than one of the top stations in a single market. (Many exceptions exist, however, called duopolies.)

If Nexstar could own both KLST and KSAN in San Angelo, for instance, “we could generate further efficiencies,” Mr. Sook said, “and some of that additional operating income would be reinvested into the local news product.” That outcome, however, would still diminish the media diversity of the market, a major goal of the government’s ownership rules, which are now undergoing a review.

Either way, for some people, the dearth of competition is an opportunity. For Mr. Meighan, the San Angelo city spokesman, having just one TV reporter at City Council meetings (rather than three or four) gives him more reason to reach citizens directly through a city-produced cable channel and YouTube channel.

“What we try to do — what we’ve had to do, really — is get our message out through other means,” he said.