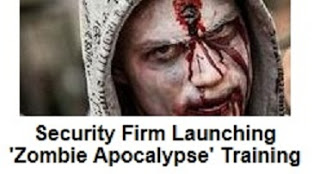 Zombie meme is still playing on public's mind!  Militarytimes.com article, "Security firm to hold zombie crisis scenario," asks question, "'Could a future crisis arise from an outbreak of viruses that destroy brain cells and render people violently catatonic, like zombies?'" Do readers wonder about the demented humor?  Can't you imagine stupid but familiar refrain after real outbreak,"what a coinci- dence, we were just conducting a training drill on that very scenario!"

The article reports exciting Hollywood sets will be used for various "Zombie" scenarios next month in Mission Bay, CA:

"The far-fetched scenario of a government grappling a zombielike threat — think movies like “Night of the Living Dead” or, more comically, “Zombieland” — has captured the attention and imagination of Brad Barker, president of the security firm HALO Corp."

"Next month, his outfit will incorporate — no kidding — zombies into a disaster-crisis scenario at the company’s annual Counter-Terrorism Summit in San Diego, a five-day event providing hands-on training, realistic demonstrations, lectures and classes geared to more than 1,000 military personnel, law enforcement officials, medical experts, and state and federal government workers."

The present writer can't see humor of a Zombie summit, when there are strange incidents already out there that make a Zombie virus outbreak - a very real threat! Are face-munching incidents of recent months really bio-weapon experimentation?