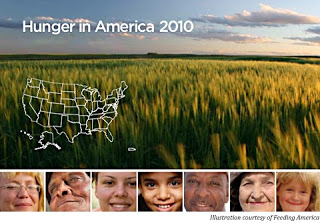 1 in 7 US Homes Hit By Hunger; Numbers Nearly Doubling

6.8m US households did not have enough food last year 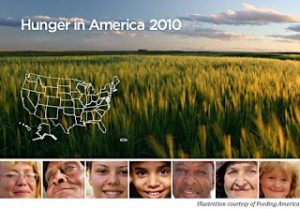 from alertnet: The number of U.S. households that reported getting emergency food from a food pantry almost doubled between 2007 and 2009, at the height of the recession, a government report said on Monday. The U.S. Department of Agriculture said the number of households jumped to 5.6 from 3.9 million.

"Households also accessed additional assistance through USDA's 15 food and nutrition assistance programs," the article in the USDA Economic Research Service (ERS) "Amber Waves" said... In the 2009 fiscal year, "15.2 million households participated in SNAP in an average month, up from 12.7 million in FY 2008," the article said.

In a separate report, the ERS said the percentage of U.S. households without food security - access to enough food for an active, healthy life - at some point during the year hit a record in 2009. It said more than 50 million people, including at least 17 million children, lived in households uncertain of having or getting enough food at some point because of insufficient money or other material resources.