nasa may have found remnants of black hole at galactic center 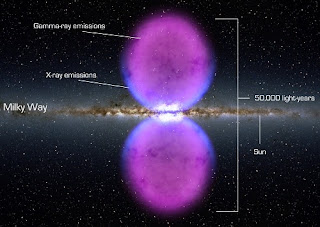 from technoccult: NASA’s Fermi Gamma-ray Space Telescope has unveiled a previously unseen structure centered in the Milky Way. The feature spans 50k lightyears and may be the remnant of an eruption from a supersized blackhole at the center of our galaxy… One possibility includes a particle jet from the supermassive black hole at the galactic center. In many other galaxies, astronomers see fast particle jets powered by matter falling toward a central blackhole. While there is no evidence the Milky Way’s black hole has such a jet today, it may have in the past. The bubbles also may’ve formed as a result of gas outflows from a burst of star formation, perhaps the one that produced many massive star clusters in the Milky Way’s center several million yrs ago.