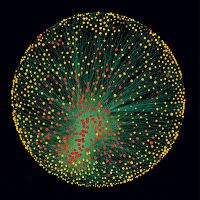 A NewScientist article reveals trio of complex system theorists at the Swiss Federal Institute of Technology in Zurich - put heads together to identify who runs the world!  "It combines the mathematics long used to model natural systems with
comprehensive corporate data to map ownership among the world's
transnational corporations (TNCs)," announces article.  Identities of top players on global stage were gleaned from "an analysis of the relationships between 43,000 transnational corporations has identified a relatively small group of companies, mainly banks, with disproportionate power over the global economy...The work...revealed a core of 1318 companies with interlocking ownerships (see image). Each of the 1318 had ties to two or more other companies, and on average they were connected to 20. What's more, although they represented 20 per cent of global operating revenues, the 1318 appeared to collectively own through their shares the majority of the world's large blue chip and manufacturing firms - the "real" economy - representing a further 60 per cent of global revenues." American artist Mark Lombardi, who predates the superconnected companies in red and very connected companies in yellow of above picture, created similar images with his pencil drawings over a decade ago!  The drawings were published in a book titled, "Global Networks".