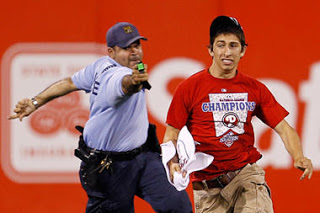 Just another night at the colosseum... 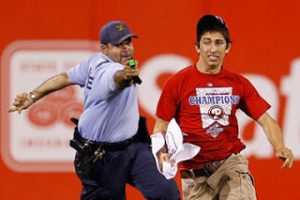 from csmonitor: Did the 17-year-old field-runner who got tasered by a Philadelphia police officer at the Phillies-Cardinals game at Citizens Bank Park Monday night have it coming? Or did the police officer struggling to keep pace go too far by firing 50,000 volts at the towel-waving kid in order to crumple him in front of nearly 45,000 fans?

That's the conversation of the day as video of the incident goes viral on the Web and Americans get another chance to weigh the pros and cons of a device that has become a favorite alternative for police officers confronting weaponless lawbreakers.

The number of Tasers in the hands of police have grown to 375,000 worldwide, and the blowback – from "Don't tase me, bro!" to a reported 300 deaths – has been significant.

The Philadelphia Police Department has said that the officer acted in accord with department guidelines, which allow officers to fire their Tasers to subdue fleeing suspects. But judging from the alternating boos and cheers from the crowd, it's far from clear where the public's sentiments lie.

To some, the tasering incident in Philadelphia is indicative of a perceived escalation of threat against police – and how the media has perhaps laid the groundwork for acceptance of Tasers by overhyping that fear.

"[The Phillies fan tasering incident] feels in some ways like a distorted version of what happened in the '60s when people were out of control over fear of war protesters, but now there's fear of almost anyone, like we're at war with ourselves in this country," says Elayne Rapping, a pop-culture expert at the SUNY's University at Buffalo. "It's a slippery slope when we're going to start letting people use weapons of ever more intense destructiveness for small things."