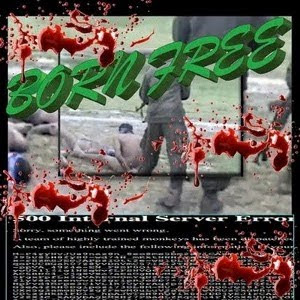 from latimes: M.I.A. protested in the all-caps mode she favors when the rattling, violent video for her brash new single "Born Free" was pulled from YouTube early Tuesday morning. After using Twitter to blame her record label and then retracting that accusation -- YouTube itself removed the short film by French director Romain Gavras for its graphic content, which included a child being shot in the head and a young man being blown up by a land mine -- she simply declared, "BOOOOOOOOO" and provided a link to the "Born Free" video on her own website.

Her tweet was more childish than it was constructive, but the transnational hip-hop star's decision to team with Gavras and release a video that clearly connected to the history of political filmmaking is no rash impulse. With "Born Free," M.I.A. lets her growing cult of fans know that she has no intention of softening her message to court the mainstream.

For those who haven't seen the clip, it's a docudrama-style depiction of American military forces rounding up members of a targeted minority in an unnamed city, taking them to the desert and executing them. Much-discussed reference points include the Peter Watkins 1971 countercultural film "Punishment Park" and, because the raided people have red hair, the South Park episode "Ginger Kids," which satirized the idea of targeted minority groups by putting redheads in the victim role.

In fact, Gavras will soon release his directorial debut, "Redheads," which takes the plot of the M.I.A. video feature-length and promises to be both ultra-violent and free of Kenny jokes. His work with the filmmaking collective Kourtrajme, which he co-founded, and on videos for other artists (most notably the French electronic duo Justice, whose song "Stress" became the backdrop to Gavras' blunt depiction of Paris gang violence) lands smack in the middle of what's long been fruitful ground for political filmmakers, including Gavras' own father, Constantinos "Costa" Gavras: the killing field where dramas of racial prejudice, institutional control and minority resistance are enacted.