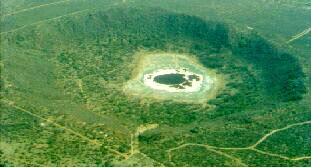 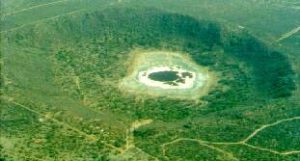 The Tunguska blast over Siberia remains the largest recent explosion much more powerful than the bomb dropped on Hiroshima. The blast epicenter was near the Stony Tunguska River and flattened 60,000,000 trees over a 200 sq. km area. Resident Semen Semenov's eyewitness account at Vanavara the nearest settlement 40 miles to the south, remains fascinating to read:

"At breakfast time I was sitting by the house at Vanavara factory facing North. [...] I suddenly saw that directly to the North, over Onkoul's Tunguska road, the sky split in two and fire appeared high and wide over the forest. The split in the sky grew larger, and the entire Northern side was covered with fire. At that moment I became so hot that I couldn't bear it, as if my shirt was on fire; from the northern side, where the fire was, came strong heat."

"I wanted to tear off my shirt and throw it down, but then the sky shut closed, and a strong thump sounded, and I was thrown a few yards. I lost my senses for a moment, but then my wife ran out and led me to the house. After that such noise came, as if rocks were falling or cannons were firing, the earth shook, and when I was on the ground, I pressed my head down, fearing rocks would smash it. When the sky opened up, hot wind raced between the houses, like from cannons, which left traces in the ground like pathways, and it damaged some crops. Later we saw that many windows were shattered…"

The Tunguska event registered at seismic stations in Europe and sent a pulse of air pressure around the world twice, picked up by British meteorologists. The causes for the explosion remain varied and controversial. Radiation and mutations in the area provide another source for differing explanations such as ball lightning. The late Russian sci-fi writer, Alexander Kazantsev, suggested after Hiroshima, the Siberian Explosion was due to an atomic-powered spacecraft mishap. Some of the stronger competing theories are attributed to either a comet or meteor.

A focus on natural or terrestrial causes has surged, recently. There is the electric universe interpretation of the 1908 event. "Curiously, reports of an unusually bright night sky began the night before the Tunguska event and continued for several days afterwards". Andrei Ol'Khovatov, a Russian physicist, is intrigued by the event, "..agrees that the impact theory leaves too many unanswered questions. He points out, for example, that witnesses reported strange weather and increased seismic activity in the area for days beforehand." Ol'Khovatov's website is filled with more recent research of interest.

In 2009, Italian researchers speculated Lake Cheko located just 5 miles from the blast epicenter, may be a possible impact crater and can be viewed here. Arthur C Clarke's Mysterous World, 1980 series, "The Great Siberian Explosion," provides an excellent account. The present writer first learned of the event from Ray Stantz, in Ghostbusters, "The biggest inter-dimensional cross rip since the Tunguska Blast..".