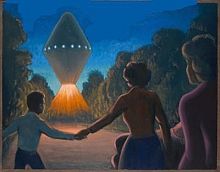 UFO Hunters examine Betty Cash, Vickie Landrum 1980 close encounter. "On December 29, 1980, Betty Cash, Vickie Landrum and Colby Landrum took a drive that would soon become a life-changing nightmare. At approximately 9PM, driving through the Piney Woods of Texas, they observed a huge diamond-shaped object flying low above the isolated road, expelling flame and emitting significant heat. That night, all three experienced horrible physical symptoms--nausea, vomiting, diarrhea, weakness, and burning sensations all over their bodies. Betty Cash's symptoms soon worsened, and a few days later, she was sent to the emergency room, unable to walk, and losing large patches of skin and clumps of hair," according to caption provided below You Tube video. Betty Cash became disabled and died 18 years later. Dr Brian McClelland, who treated Betty for years, remains convinced she succumbed to effects of radiation poisoning. Vickie Landrum died just a few years ago. The victims sued the US government for $20 million but their case was dismissed.

UFO Hunters contacted Colby Landrum, who provides details of experience. Landrum relates account of remote stretch of Texas farm-to-market road replaced five months later. UFO Hunters take asphalt samples and solicit road engineer's opinion that it had been resurfaced several times. Betty Cash's daughter attests her mother had been moved to an isolated room with a hazmat symbol on its door, when first hospitalized. Dr McClelland attests he was never able to get all of Betty Cash's medical records as requests went unanswered. The doctor can only speculate his requests were blocked. McClelland also reveals UFO may have been a nuclear-powered craft, a WASP II, as suggested to him by a source. The Cash Landrum incident remains one of the top UFO incidents ever recorded. The UFO Hunter episode begins below!