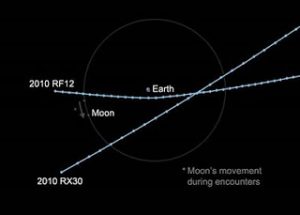 from space.com: Two asteroids that swooped past Earth Wednesday may have caught the attention of the public, but events like these are not actually rare, NASA scientists say.

“This is the first time we’ve seen (two) combined within a 24-hour period, but that’s probably because we don’t know everything that is out there,” said Lindley Johnson, program executive of the Near-Earth Object program at NASA headquarters in Washington.

Single asteroids have been known to make such close passes, but they usually slip by unnoticed, Johnson told Space.com.

In fact, with a rough estimate of 50 million unknown asteroids, a 33-foot-wide near-Earth object could pass harmlessly between Earth and the orbit of the moon every day, Johnson added. Such an asteroid might hit Earth’s atmosphere once every 10 years, but because of its small size, it would pose no substantial threat to the people or property below.

“They would certainly break up in Earth’s atmosphere, or we might get some meteorites on the ground,” Johnson said.

Both asteroids flew well inside the orbit of the moon.