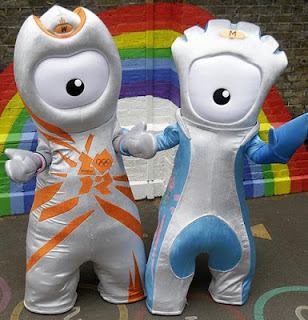 The occult symbols of 2012 London Olympics are apparent. Advent Of Deception deciphers the Olympic mascots: Wenlock and Mandeville (picture). AOD explains “…representation of the All-Seeing Eye. The eye is crowned with what appears to be the capstone of the unfinished pyramid indicating ascension complete. Within the capstone is the letter ‘W’ which could very well represent the word ‘World’…The left Mascot’s face looks like heart, the Pyramid and Heart represent Knowledge and Enlightenment. The right Mascots face looks like a 5 sided pentagram which represents war.  The eye may also represent the cyclops (predator) myth creature or an alien species.“ The name Wenlock is an Irish name for a boy meaning, “..from the holy monastery…”.  Mandeville is a French name for a boy and means “great town,” according to the website. AOD suggests “…clue behind…the Mascots is the definition of the names, which defines as “A Baby Boy From a Holy Monastery” and “Great Town”. What could it mean?