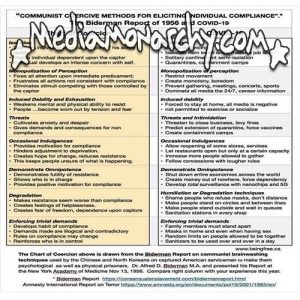 Great regret, rights records and voting systems + this day in history w/Milli Vanilli finished and our song of the day by Pixies on your #MorningMonarchy for November 16, 2020.

Incredulity is often the gateway to learning and understanding our world, if we ask a few questions prior to assuming it’s not true. Try it: I thought this was supposed to be a conspiracy theory. But here it is, straight from Trudeau’s mouth. The pandemic is the excuse for a “Great Reset” of the world, led by the UN. (Audio)
https://twitter.com/tragedyandhope/status/1328066697681641472

Scamdemic lockdowns are just the latest use of time-tested psych warfare techniques, from the Cold War to the War Of Terror
https://twitter.com/mediamonarchy/status/1327119271047159812

China, newly elected to the U.N. Human Rights Council, just reviewed the U.S. human rights record. // 9 out of 10 #UighurMuslims approve of this message, the 10th was unavailable for comment-the #CCP worked him to
Skull (Audio)
https://twitter.com/NOTDumPhuk/status/1326888271700504582

The refusal of Republican leaders to acknowledge the results of the presidential election is not just an attack on Biden. It is an attack on American democracy, and shows the degree to which the Republican party is moving toward authoritarianism.
https://twitter.com/BernieSanders/status/1327680622442270720

Biden wants to lock us all back down, muzzle us and go back to bombing the fuck out of brown children and you’re over here warning us about republicans and authoritarianism because they want democratic election results examined to make sure they were legit. Kindly fuck off.
https://twitter.com/eurekaskastle/status/1328046044572131328

A Biden Presidency Would Be A Dream Scenario For Our Corporate Overlords
https://twitter.com/BlacklistedNews/status/1327677690879516672

Ah, I wondered what @Greg_Palast was up to: Defending fake left and only seeing crimes with an “R” after the name, as expected. Muh two-party illusion! #VoteHarder!
https://twitter.com/mediamonarchy/status/1328041308959674368

Ex-CIA Chief Under Obama Urges Palace Coup Against Trump So He Doesn’t “Declassify Everything”
https://twitter.com/ShawnCathcart/status/1326398404428238848

BREAKING: Outsiders with USBs and VCards Were Allowed in #Pennsylvania Counting Areas with No Observers Present
https://twitter.com/NOTDumPhuk/status/1327215577019125760

Peter Neffenger, chairman of the board of Smartmatic is on Joe Biden’s DHS transition team. Smartmatic was founded by 3 Venezuelan engineers and incorporated in Delaware. Smartmatic purchased Voting Systems and Sequoia was eventually acquired by Dominion.
https://twitter.com/rising_serpent/status/1328035735287558144

Flashback: 1 in 7 US Homes Hit By Hunger; Numbers Nearly Doubling // 6.8m US households did not have enough food last year (Nov. 16, 2010)
https://mediamonarchy.com/1-in-7-us-homes-hit-by-hunger-numbers-nearly-doubling/