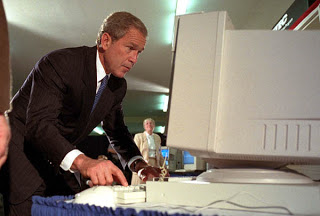 from allgov: Six years after the problem was first discovered, computer experts have located 22 million emails that became lost during the Bush administration. The discovery followed lawsuits filed by Citizens for Responsibility and Ethics in Washington (CREW) and the National Security Archive, which demanded the government locate the emails. The electronic messages won’t be available for years, however, due to the time it takes the National Archives to sort through and process the volume of information.

The Obama administration is continuing to search for additional days of missing emails from the Bush years.

Former Bush White House spokesman Scott Stanzel said the 22 million emails were recovered while Bush was still in office, and refuted conspiracy theories claiming the administration had tried to hide communications from the Valerie Plame scandal.

The National Security Archive is a research institute based at George Washington University, while CREW is a non-profit, non-partisan government watchdog.