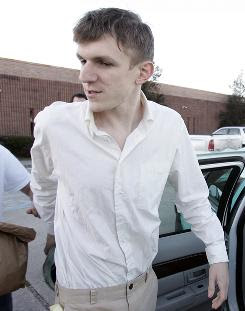 Federal authorities said two of the men posed as telephone workers wearing hard hats, tool belts and flourescent vests when they walked into the senator's office inside a federal building in New Orleans on Monday. The other two were accused of helping to organize the plan.

The most well-known of the suspects is James O'Keefe, a 25-year-old whose hidden-camera expose posing as a pimp with his prostitute infuriated the liberal group ACORN and made him a darling of conservatives.

O'Keefe and suspect Joseph Basel, 24, formed their own conservative publications on their college campuses. A third suspect, Stan Dai, 24, served as editor of his university's conservative paper and once directed a program aimed at getting college students interested in the intelligence field after 9/11.

And the fourth suspect, Robert Flanagan, 24, wrote for the conservative Pelican Institute and had recently criticized Landrieu for her vote on health care legislation. O'Keefe was a featured speaker at a Pelican Institute luncheon days before his arrest. Flanagan is the son of the acting U.S. Attorney for northern Louisiana.

It's not yet clear whether the plan was a prank intended to be captured on camera or a more serious attempt at political espionage, as claimed by state Democrats who dubbed it "Louisiana Watergate."