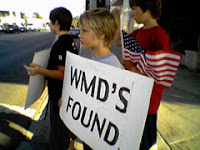 from raw story: A new Newsweek poll out this weekend exposed "gaps" in America's knowledge of history and current events.

Perhaps most alarmingly, 41% of Americans answered 'Yes' to the question "Do you think Saddam Hussein’s regime in Iraq was directly involved in planning, financing, or carrying out the terrorist attacks of September 11th, 2001?"

That total is actually up 5 points since September 2004.

Further, a majority of people couldn't identify Saudi Arabia as the country of origin of most of the 9/11 hijackers, even given the question in multiple choice format. 20% answered Iraq, while 14% believed the hijackers came from Iran.

A majority (52%) believe the US is losing the war against al Qaeda, however Newsweek disagrees. In the magazine's reporting of the poll, they made judgment that the US is in fact not "losing the fight against al-Qaeda or radical Islamic terrorism." 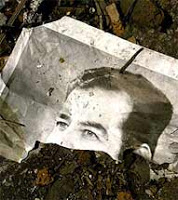 Closer to home, 89% of Americans are unable to name the Chief Justice of the Supreme Court (John Roberts), though a majority of those polled were able to name Nancy Pelosi as the current Speaker of the House.

A large majority of people said they didn't know or didn't care who the winner of this year's American Idol competition was (or at least weren't willing to admit it).

The full results of the Newsweek poll are available here.