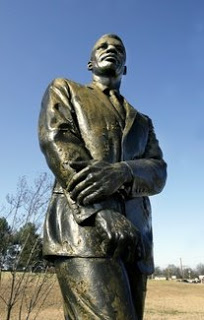 from biloxi sun herald: Medgar Evers once said, "You can kill a man but you can't kill an idea." It was 45 years ago today that Evers, the field agent for the Mississippi NAACP, was assassinated outside his Jackson, Miss., home just hours after leaving the Coast where he'd been planning a protest with Dr. Gilbert Mason for June 16, 1963, in an effort to gain blacks access to Mississippi's public beaches.

Evers was shot shortly after midnight on June 12 as he got out of his car and dragged himself to the back door of his home, where he died in front of his wife and three children. Evers' killer, Byron De La Beckwith, was convicted of his murder more than 30 years later in 1994 after Evers' body was exhumed and the bullet tied the suspect to the murder. "Every year this time," said Robert L. Stepney, who fell quiet before remembering the anniversary of his friend's death. He thinks about Evers, his college roommate for three years, and said, "You don't have many good friends."