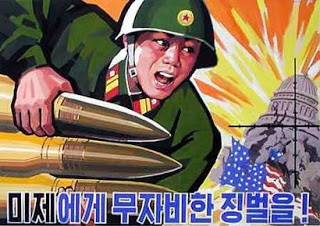 north korea launches 7 missiles off its east coast,but the threat was made in the USSA - so happy independence day, US imperialists!

from danger room: North Korea defied the U.N. Security Council today by firing off a barrage of ballistic missiles into the Sea of Japan. South Korea’s Yonhap news agency, quoting defense sources, said the missiles appeared to be Scud-type missiles with an estimated range of 400 to 500 km; they may have been Rodong missiles, which are essentially a scaled-up version of the Scud design. Earlier this week, an unnamed Pentagon official told American Forces Press Service that North Korea’s launch of four short-range missiles on July 2 were, in part, a bid for international attention. “I think that North Korea is looking for attention, and this is one of the ways that they seek to get attention,” the defense official said. The same strategy seems to be at work today. In this case, the launch of seven missiles looks deliberately timed to coincide with U.S. Independence Day celebrations. It’s reminiscent of the 2006 launch of a Taepodong-2, which also appeared timed to disrupt the Fourth of July. But never mind the Scuds: The North Koreans were not able to pull off a more dramatic publicity stunt, like launching a long-range missile that could (theoretically) reach Hawaii. While there has been speculation about a possible long-range missile test, the Christian Science Monitor notes that there are no reports of new activity around the launch facilities where the North Koreans set up their long-range missiles. 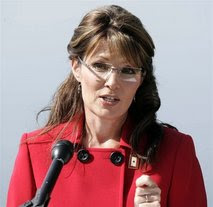 from ap: Alaska Gov. Sarah Palin abruptly announced Friday [jul3] she is resigning from office at the end of the month, a shocking move that rattled the Republican party but left open the possibility she would seek a run for the White House in 2012. Palin, 45, and her staff kept her future plans shrouded in mystery, and it was unclear if the controversial hockey mom would quietly return to private life or begin laying the foundation for a presidential bid.

cynthia mckinney's letter & phonecall from jail:
'the israelis hijacked us'
from raw replay: Cynthia McKinney calls WBAIX from Israeli prison. She and 20 others where detained after being seized by Israeli Navy while in international waters. They were attempting to deliver humanitarian aid to Gaza. This video is from WBAIX (via YouTube), broadcast July 2, 2009.

closed since 9/11, statue of liberty crown reopens for the 4th of july 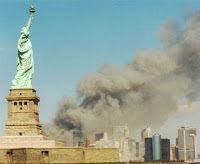 from dpa: The first people in eight years to climb the narrow inner spiral up to the Statue of Liberty's crown were seven US immigrant soldiers who became US citizens under sparkling skies Saturday morning on US Independence Day. Lady Liberty, which has greeted millions of immigrants to the US as they entered New York Harbour, flung open her skirts again following years of closure after the 2001 terrorist attacks. "The idea of freedom is why I moved to this country, and this moment means more than I can ever describe with words," Sameh Zaki, 26, a native of Egypt and US soldier, told New York's Daily News. The re-opening coincides with the celebration of US Independence Day, which marks the adoption of the US declaration of independence from Britain in 1776. Interior Secretary Ken Salazar was on hand for the swearing-in ceremony of hundreds of new US citizens on Liberty Island - a ceremony repeated around the country and even in as far flung places as Iraq, where active duty military members of the US military from different countries were sworn in by Vice President Joe Biden. Access to Liberty Island and the inside of the Statue of Liberty was totally prohibited after the September 11, 2001 attacks due to security concerns. US national park officials have gradually allowed more access, first to the island and later to the lower storeys of the statue.