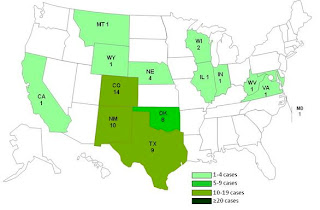 from food safety news: So far, at least 55 people across 14 states have been infected and eight have died in the deadly outbreak caused by Listeria-contaminated cantaloupe, the Centers for Disease Control and Prevention (CDC) reported Wednesday.

As of 5 p.m. Eastern Time, the number of confirmed cases and deaths had doubled since last week, and the toll likely will rise, given the age of most victims and the severity of their illnesses. The CDC’s update on the outbreak says most of those sickened are over 60, and of 43 patients with available information, all were hospitalized.

State health departments are investigating 13 additional suspected cases of outbreak-linked listeriosis, and it’s possible that people who ate the tainted cantaloupe are infected with Listeria but aren’t sick — yet. The incubation period for the bacteria is about three weeks, although it can take as long as two months for listeriosis to develop after exposure to contaminated food.